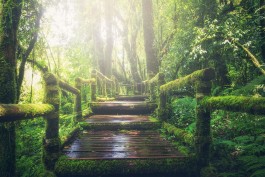 Forest 404 is set in the 24th century, after a data crash called The Cataclysm. Pan, our protagonist, is a young woman with a boring job sorting and deleting old sound files that survived the crash. She uncovers a set of sound recordings from the early 21st century that haunt her.

They are recordings of rainforests – places which no longer exist – and Pan feels compelled to hunt down the truth about how the forests of the old world died. All the time she is pursued by the agents of the new world’s ruling powers.

The drama will provoke you to imagine the world we know today as a thing of the ancient past, to picture a scenario where all we have left of the earth’s verdant ecology is a few audio files. The big question at the centre of the tale is: what are we willing to lose, and who are we willing to become?

Can you feel loss for something you’ve never known?

Episode 1: Life in the Fast Times

When Pan finds a 21st century recording of a rainforest, she has no idea what it is...

At first Ross is overjoyed to be reunited with the voice of his lost wife Charlie. But her increasingly strange behavior leads him to a stunning discovery.

Episode 3: Into the Inner

Pan finds an illegal brain shop to uncover how the recordings have changed her.

Daria and The Hands close in on Pan as they race towards The Oil Lake.

In fear of seeing another civilisation self-destruct, Theia uncovers the truth behind Pan’s journey.

Episode 7: Dreams of the Autopilot

Daria has a confession to make – a secret from her past that haunts her every night.

Pan and Theia have a plan, but it’s a sketchy one and it’s probably going to go wrong.

Daria escorts Pan to The Convocation. An era has ended. Can, or should, a new one begin?